Businesses produce a lot of documents: mails, contracts, acts, bills, invoices, reconciliation acts, etc. This paper work may be enjoyable for young businessmen, because it gives a feeling that the company is growing. But for a big company, it could be a nightmare!

If a  company has more than 10 employees, then the number of people  who are responsible for approving and signing documents grows - project managers, sales personnel, lawyers and bookkeepers. They all participate in the approval workflow, as well as clients, suppliers and contractors. These approvers leave comments, suggest adjustments to be made on the documents and wait for a swift response.

You just can’t waste your time running around, looking for versions of documents, sending mails with the edited contracts and putting every approval party in "CC".

Paper work and sending e-mails is time-wasting and leads to chaos.

We also have a solution for both cloud and on-premise Bitrix24.

The integration of document automation can save the company a lot of money, ease the employee’s job and make clients happier.

DAS hastes the work and frees the resources.

There are document automation solutions for large companies with complex processes. The ‘Big’ DAS can work with digital signs, allow you to draw arbitrary processes and integrate with Enterprise Resource Planning systems (ERP) in companies. The list of most popular DAS:

The integration of the system like this can take several months and costs a lot of money. This is for ‘Big’ companies.

We can reduce your implementation budget and offer a quick-to-integrate solution for document automation based on Bitrix24.

This solution will fit relatively small companies (less than 2000 employees). We’ve chosen the most needed functions and implemented them with the convenient User Interface.

The solution is shipped as Bitrix24 Marketplace Module:

This ready-to-implement solution has been successfully tested in different business fields and is already used by many enterprises.

MiniDAS is a document automation module for Bitrix24, prepared for independent integration.

MiniDAS for Bitrix24: who should use it, what can it do and what’s the price?

MiniDAS is for your company if:

MiniDAS is implemented as an easy-to-install Bitrix24 module.

It’s only available in self-hosted on-premise solutions, not in cloud versions.

What should you do in case of a cloud version?

You can implement the document negotiation in the cloud version too, with a bit more simplified User Interface. It will cost at least $500. Send a request.

But if you want the more convenient user interface for viewing for document and for Tasks, then you should buy self-hosted Bitrix24 (if you do so, we will provide discount for MiniDAS modules).

INTERVOLGA is ready to carefully transfer your cloud version into self-hosted version without any data loss and with minimal downtime. This is not as easy as it seems: we recommend you read the list of most frequent problems you can encounter while transfering your Bitrix24 from cloud to self-hosted version.

As a result, the company’s director and legal department will be able to see all the information about the document’s workflow.

Let’s take a look at how to work with the module.

Legend: an IT company needs to organize tech purchase negotiation.

Demonstration of Contract negotiation at Bitrix24

The Contract negotiation process is not fixed “forever” in one state. If you need to add a new step or to rename a button – you can do that using Constructor in the Control panel. The linear process of purchase is a simple example, MiniDAS Constructor allows you to tune and launch the more complex ones. More info about tuning and integration sequence is at the next section.

The contract negotiation workflow at Bitrix24

Where is document negotiation at Bitrix24 ? The page is shown on the left menu for all users.

The negotiation statuses are shown at the documents list page.

You can see the negotiation status for a particular document and tasks for each coordinator. 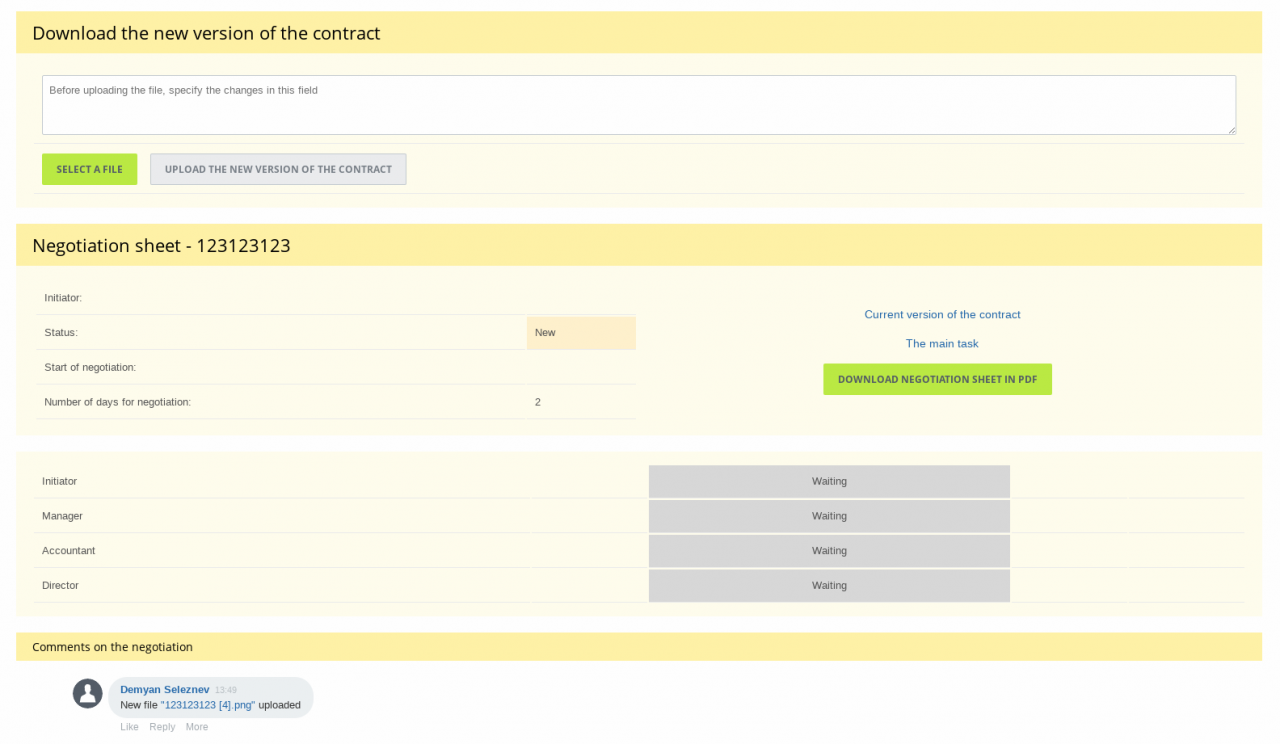 The current version of the contract is available on Disk. You can see the history of changes at the negotiation task. 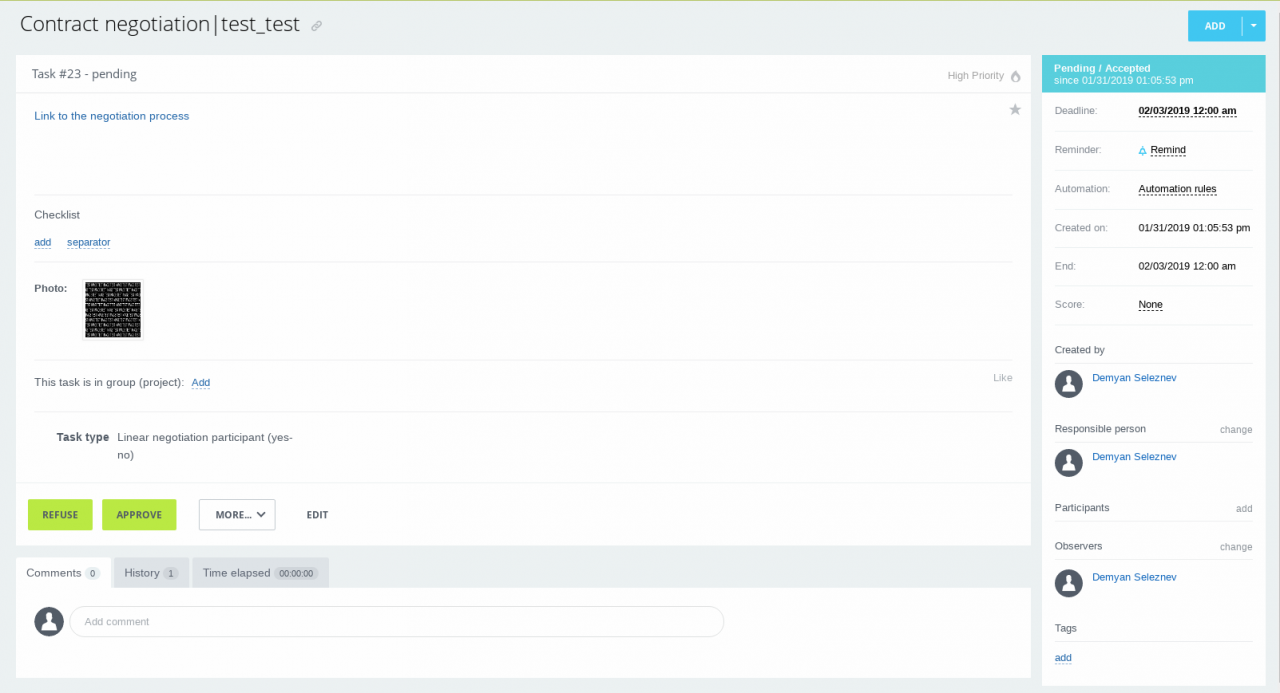 Let’s start a new negotiation process. That is the start page of the contract negotiation. Let’s add a new contract.

You should choose the negotiation route, the contract name and select a particular user for each role. 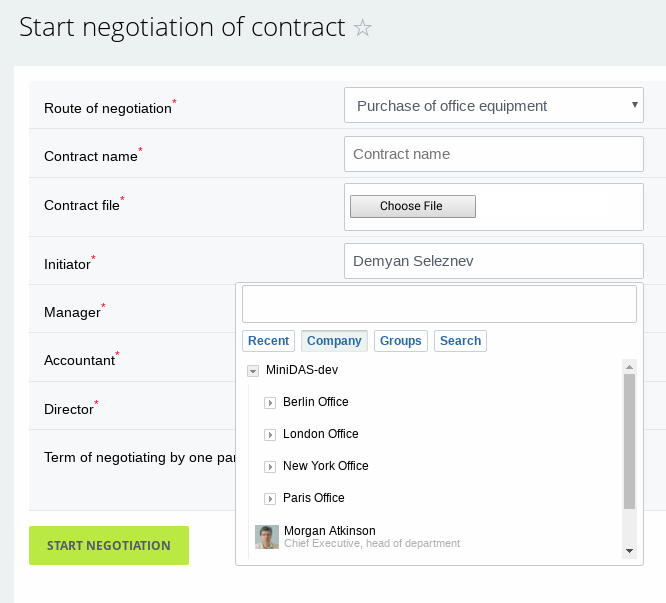 After you start the contract negotiation the main task is created for the process Initiators. They should start the process. 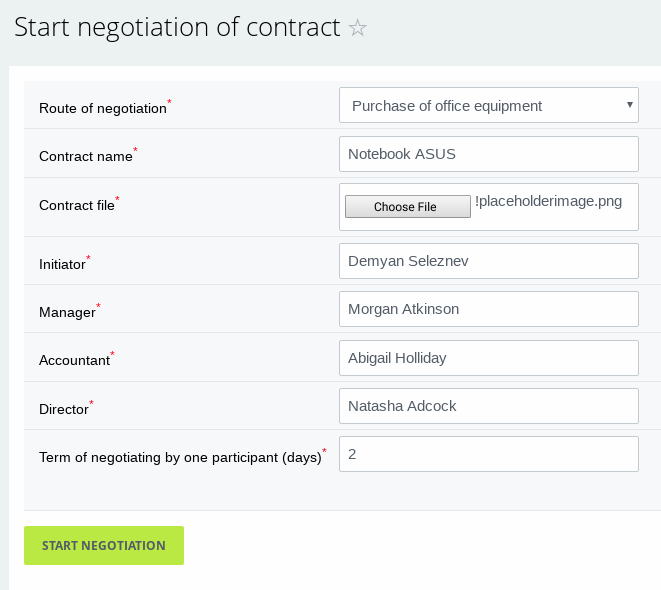 Note: non-default  task buttons are used at miniDAS. You can set any name for any button in the Process Settings page.

The tasks for every member of contract negotiation are created progressively during the process.

If you need to upload a new contract version, you should go to ‘Process negotiation’ page and upload a new file there.

Screenshot below shows a negotiation task for the director. 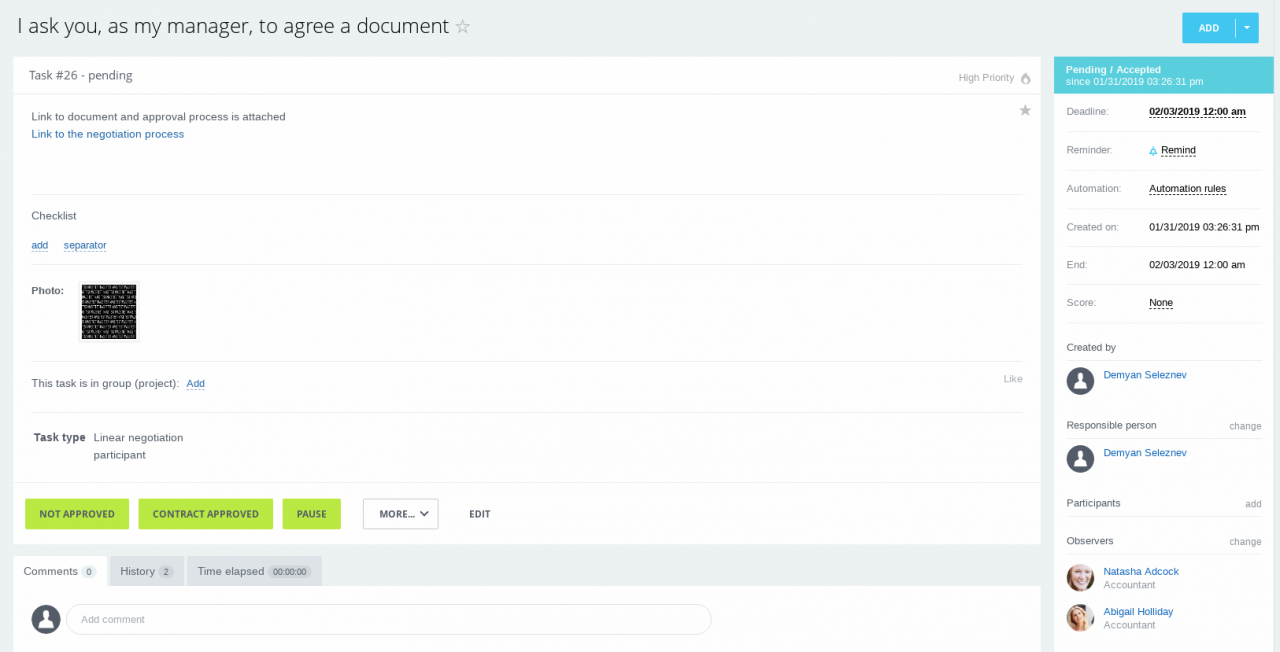 The screenshot of contract negotiation detail page is below.

MiniDAS allows to tune and launch any negotiation route you want. We have implemented  the function of coming back to any stage of the contract negotiation.

That is an option

Let’s see how ‘forks’ and ‘returns’ work. Depending on the pushed button, the contract negotiation route is chosen. We will show how users choose the route and back to the previous process stages.

The contract negotiation regulation. The options to choose (forks) and backing to previous stages (returns)

For example, we have a company that specifies on renting venues. The process of negotiation in this company depends on the contract value. 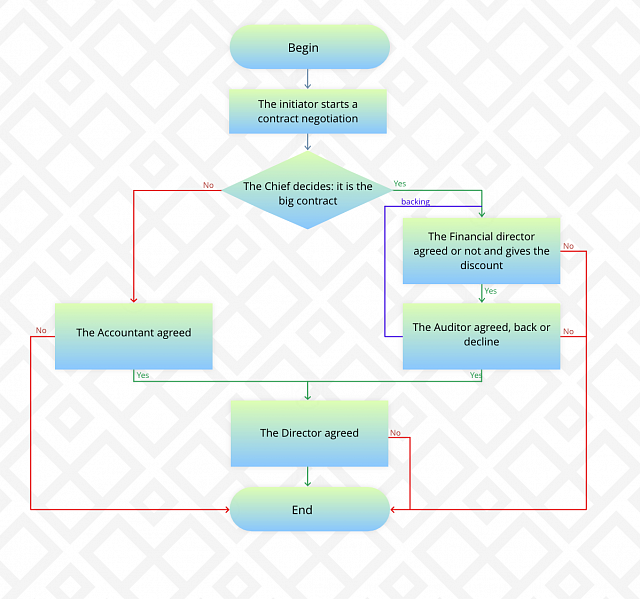 You can choose the default route statuses:

The alternative routes creation for the document negotiation

It is required to create a new statuses for ‘Executive Solver task’ type of task.

Three action buttons should be created as well.

The new statuses are for creation of new buttons in ‘Executive Solver task’.


For the button performance tuning you have to create the Handlers, that is special tuning procedures. Each button push can execute several actions via the Handlers.

Via the button “Normal contract” we create a task for the accountant. The type of the new task is “Task for agreement (Yes / No)”.

Looking ahead, we can tell that the same ‘Yes/No task’ will be used for Director and Financial Director.

This task fully complies ‘negotiation process participant’ task from the simple example which was examined in the First Part of the article.

Backing to previous step at regulation of the document negotiation

The creation of ‘backing step’ includes the same stages as before - task type, transitions and handlers

We need a new status of task and the ‘return back’ button.

The ‘return back’ button handler is the most interesting one. 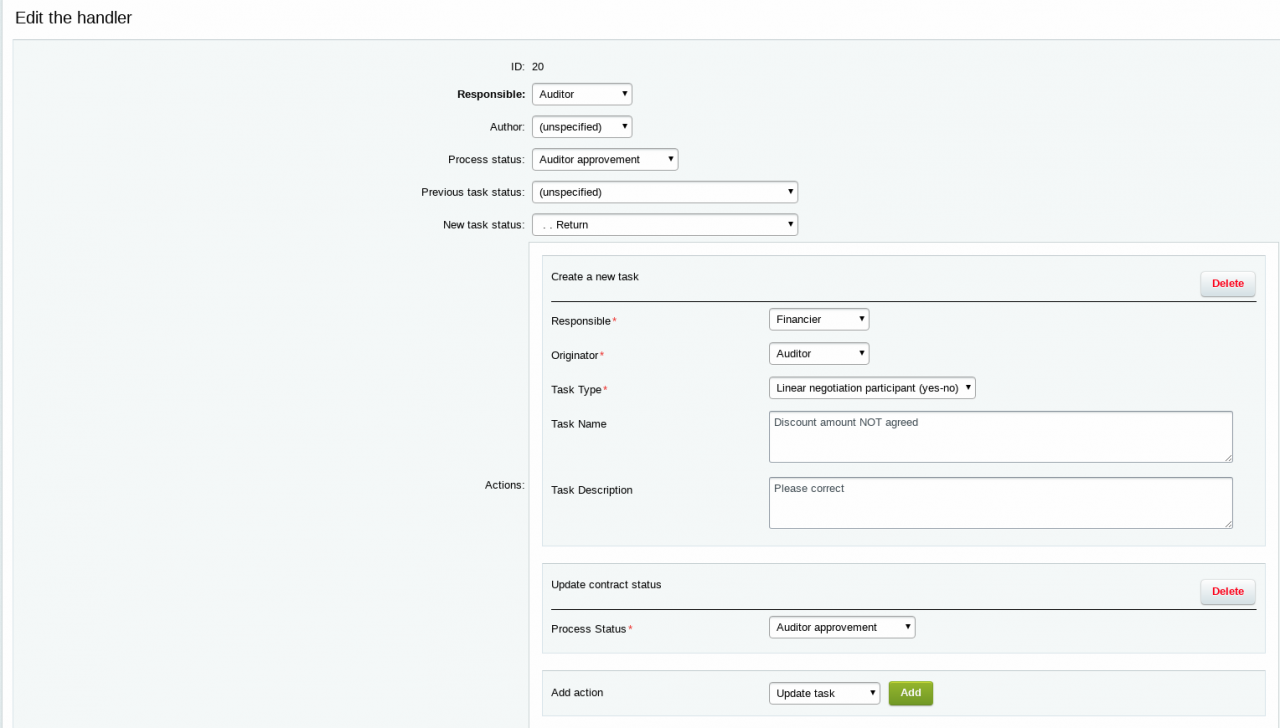 We create a new task for Financial Director to re-define the discount.

The document version history is available as comments on the negotiation page.

The price for mini-DAS and the procedure of implementation

Purchase of the document negotiation module

MiniDAS is distributed as a module for self-hosted version of Bitrix.

The price includes the configuration of the first document approval process.

The configuration of negotiation routes

You can configure the document negotiation routes by yourself using that article as guidance notes. It usually takes about 10 hours.

To order an individual configuration and modifications for module, contact INTERVOLGARU

We can configure document negotiation workflow for you (within the module possibilities). The price for one process starts from $500.

The price for module modifications: $50 per hour of specialist’s work.